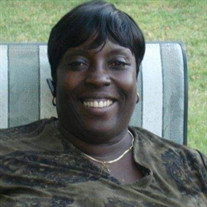 On Thursday February 3rd, God called one of his angels to heaven for eternal rest. Anneselene was a devoted wife, mother, sister, grandmother, aunt and friend. Anneselene Ward was born February 20, 1952 to the late Sadie Pearl Jones and Hubert... View Obituary & Service Information

Please keep the Ward family lifted up in prayer during this difficult time......

On Thursday February 3rd, God called one of his angels to heaven...

Send flowers to the Ward family.