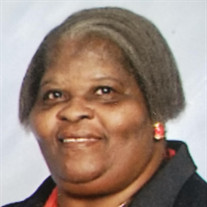 Annie Ruth Owens, 70, went home to be with her lord and savior on Thursday, August 29, 2019. Annie was born to the late Nina and Romuel Gay on December 10, 1948 in Bethel, NC. She was preceded in death by her husband the late Larry Owens Sr, Son Lamont Arnell Owens and Grandson Antonio Owens. Annie and Larry were married for a beautiful 49 years and had four beautiful children. Annie spent her early childhood years living in North Carolina with her siblings before moving to Virginia Beach. She would go on to have a career in the hospitality industry before retiring in the early 90s. Annie loved many things in life including Church, Music, her late husband Larry Owens better known as Tunk, and her Grandchildren. She was known throughout her life as being quiet, sweet, approachable and a giver. You would often hear her singing and see her stomping her feet. There are so many people that she touched in so many ways, that will always leave a lasting impression. From 2015 until her departure from here on earth she lived in Orlando, FL with her son Larry Jr. and daughter-in- law Jocelyn. She hated it at first, but then grew a liking to the weather and all the beauty of the sunshine state. She experienced her first cruise for her 68th birthday in December of 2017. She went on to enjoy many other first in her life such as flying first class, flying solo several times back home to visit family in Virginia, enjoying her 70th birthday on December 10, 2018 in a penthouse suite for 4 nights. She often didn’t say much, but her smile often said everything! Annie Ruth Owens will be truly missed by all who knew her and loved the person that she was. She leaves to cherish her memories: Son Marvin Lavelle Gay (Virginia Beach) Son Larry Owens, Jr ( Orlando, FL),Daughter Tammy Terrell Stephenson (Virginia Beach) Daughter- In-law, Jocelyn Owens (Orlando, FL), (8) Grandchildren, William S Taylor, Jr, Kiona Owens, Desmond Owens, Azaria Stephenson, Quincy Stephenson, Cierra Owens, Devin Owens, Keshara Perry. (16) Great Grandchildren, (8) Siblings, Louise Gay(Minnesota) Delores Gay (Virginia Beach) Maryann Gay (Virginia Beach) Barbara Gay (Virginia Beach). (5) Sister- In-laws, Marjorie Lewis, Frances Morgan, Roslyn Owens Williams, Lessie Cason (Joe), Katharine Hinton (Willie), (3) Brother- In-laws, Thomas Owens, Randy Owens, Percy Owens, Jr . She also leaves behind a host of nieces, nephews, cousins as well as close friends. The Owens Family would sincerely like to thank each and everyone of you for all your calls, messages, gifts during this time of the passing of our beloved Mother. Special thanks to Marjorie Lewis for always being there for both our parents.

Annie Ruth Owens, 70, went home to be with her lord and savior on Thursday, August 29, 2019. Annie was born to the late Nina and Romuel Gay on December 10, 1948 in Bethel, NC. She was preceded in death by her husband the late Larry Owens Sr,... View Obituary & Service Information

The family of Mrs. Annie R Owens created this Life Tributes page to make it easy to share your memories.

Annie Ruth Owens, 70, went home to be with her lord and savior...

Send flowers to the Owens family.