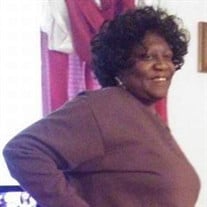 Mrs. Bertha Gates departed this life at the age of 66, on Thursday, August 15, 2019. She was born November 30, 1952 to the late Doc Gentry and Virginia (Suggs) Gentry in Hughes, Arkansas. Bertha lived in Lynn, Massachusetts... View Obituary & Service Information

The family of Bertha "Pie" Gates created this Life Tributes page to make it easy to share your memories.

Mrs. Bertha Gates departed this life at the age of 66, on Thursday,...

Send flowers to the Gates family.