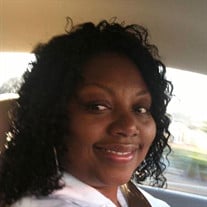 Debbie Ann McGaughey was born in Pine Bluff, Arkansas, to Gene and Georgia Givens on November 11, 1965, the second oldest of eight children. On September 18, 2021, in Chesapeake, Virginia, “Mrs. Debbie” suddenly transitioned from this life into her heavenly home at the age of fifty-five. She graduated from Pine Bluff High School and the University of Arkansas in Pine Bluff, Arkansas, with a B.A. in Accounting. Mrs. Debbie was a strong advocate for children and was always involved in the community. She was a leader and irreplaceable pillar in the Hampton Roads community. What started as a temporary volunteer position began a 26-year career with the Boys & Girls Clubs of Southeast Virginia, a national organization of local chapters which provides after-school programs for young people. Mrs. Debbie served as the Unit Director of the several clubs the Rosemont Unit being her last.  She recently accepted a promotion as Area Director. During her 26 years of service, she changed the lives of thousands of children. She was a biological Mom of one but a second Mom to thousands. Mrs. Debbie extended her love for helping others at an early age when she served in The Derrissaux Missionary Baptist Church in her hometown. She later shared her passion for helping others as a member of The Mount in Chesapeake, Virginia. She had a love for the game of softball at an early age she and played on several teams, he loved to cook and make new recipes. Mrs. Debbie was a devoted wife to her husband Anthony “Trotter” McGaughey, her high school sweetheart. She was a devoted mother to their only daughter Tanisha McGaughey. Debbie McGaughey’s life and legacy will never be fully realized, as eyes have not seen, and ears have not heard, all that she has done. Her deposits into the generations of the past, those of today and tomorrow, more than qualify her as A Mother who lived to serve children. But her relationship and title with the Lord is her ultimate reward. She has been “crowned” by the Master. Treasuring her precious memories are her husband: “Trotter;”;  daughter Tanisha; siblings Charles Battles (Rose), Norma Givens, Terry Givens, Linda Arnold (Percy), Gene Givens Jr. (Rhonda), Loretta Givens, Wayne Givens; nieces, nephews, cousins, aunts, and uncles, the Boys and Girls Club children, and many, many friends, far too numerous to mention. Take your rest, Mrs. Debbie She Lived to Serve the Children.”

The family of Mrs. Debbie Ann McGaughey created this Life Tributes page to make it easy to share your memories.

Send flowers to the McGaughey family.