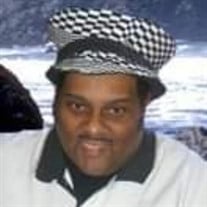 Josiah Blount was the oldest son of three children born to John and Richetta Blount.  He was born July 20, 1955.  At age 10 after losing both parents he was raised by his late grandmother Alma Spruill He graduated from Indian River High school... View Obituary & Service Information

The family of Mr. Josiah Blount created this Life Tributes page to make it easy to share your memories.

Josiah Blount was the oldest son of three children born to John...

Send flowers to the Blount family.