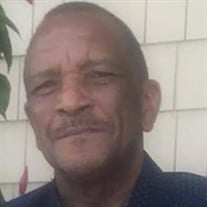 Percy William Owens (Monk), was born on October 23, 1951, in Virginia Beach, Virginia, to the late Percy Thomas Owens and Lessie Frances Goldie Owens. God reached down and took him in his arms on Thursday, July 15, 2021. Percy’s formal education took place at Seaboard Elementary School and Union Kempsville High School. Shortly after high school Percy worked for a well-known, now historic, grocery store in Pungo known as Munden’s Grocery. Percy later joined the Job Corps where he learned his cooking skills which became a passion for him; he then became a cook at Red Lobster on Independence Boulevard for a number of years. During this timeframe of his life, he met and married the love of his life the late Druscilla Swan Owens and had five children. In the midst of having his children he owned and operated his own ice cream truck and became affectionately known as the “Ice Cream Man”. He ran that business for many years with his wife Dru by his side and his children riding along. After his family became larger, he used his skills and love for cooking to become a Chef at the Clarion Hotel now known as Crowne Plaza Hotel for over 20 years. Percy beat to his own drum, he loved cooking, gardening, music, hosting family gatherings and having a good time the way he chose. Percy was predeceased by his grandson, Jalah M. Owens, his brothers Larry R. Owens (Annie deceased), George J. Owens, and his sister Katharine L. Hinton. Percy leaves to treasure his loving memory his three daughters Valerie B. Owens of Nashville, Tennessee, Florence L. Owens and Goldie Y. Owens of Virginia Beach. His two sons Percy A. Owens (Khalilah) and Marquel W. Owens of Virginia Beach, and his grandson Cannon C. Owens-Cooley of Virginia Beach. Percy also leaves his siblings to cherish his memory, his four sisters Marjorie Lewis, Lessie L. Cason (Joe), Frances O. Morgan all of Virginia Beach, and Roslyn R. Williams of Orange Park, Florida. His two brothers, Thomas L. Owens Sr., and Randy C. Owens of Virginia Beach. Also, a sister-in-law Lucy C. Owens of Virginia Beach, and two brothers-in-law Willie O. Hinton Jr., and Michael E. Swan both of Chesapeake, Virginia. Last, Percy leaves a host of nieces, nephews, cousins and friends to relish in his memory.

The family of Mr. Percy W. Owens created this Life Tributes page to make it easy to share your memories.

Send flowers to the Owens family.